Attorney General Jeff Sessions will travel to California on Wednesday to make his case that the state’s laws limiting cooperation by law enforcement and employers with federal immigration agents run afoul of federal law. 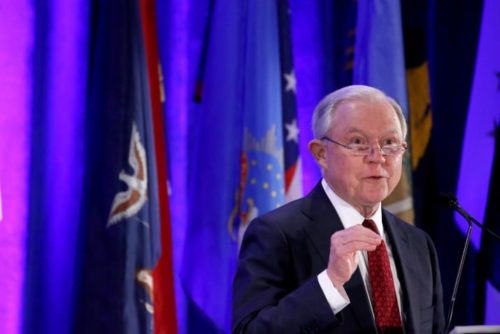 “’I don’t want to be the position of having to challenge these laws,’ Sessions told the law enforcement group Wednesday morning. ‘I can’t sit idle while the lawful authority of officers is being blocked by politicians.’

Sessions alleged that sanctuary laws in California do not merely restrict local officials from helping deport undocumented immigrants, but rather, that the policies are “actively obstructing federal law enforcement,” and in turn, putting violent criminal on the street.

‘It is a plain violation of federal statute and a violation of common sense,’ he said, calling sanctuary laws a “radical, irrational idea” that effectively creates open borders.California Attorney General Xavier Becerra shot back Tuesday night — before he’d seen the lawsuit — insisting his state complies with federal law and comparing the Trump administration’s announcement to a low-budget film.

‘We have seen this B-rated movie before,’ Becerra said on a conference call with reporters, referring to the federal government’s repeated clashes with California over immigration.

‘They better have good evidence, because we are going to fight back,’ he said. ‘We are doing nothing to intrude on the work of the federal government to do immigration enforcement.’

The Justice Department under Sessions already has taken steps to penalize state and local governments for adopting sanctuary laws, but this is the most direct challenge to date. Sessions has publicly and repeatedly criticized politicians and law enforcement officials who embraced these types of policies, and the Justice Department has been reviewing whether jurisdictions with sanctuary policies should lose their eligibility for federal grants.

Click here for the full story published by BuzzFeed News.