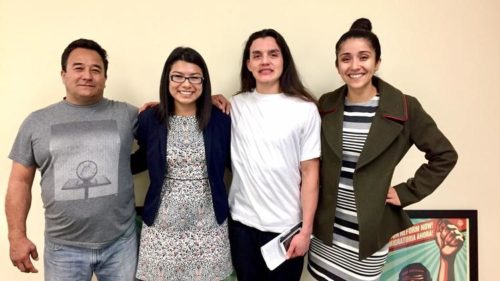 “Three immigrants held at Otay Mesa Detention Center who couldn’t afford the bond amount given to them by a judge are now out of detention thanks to a Berkeley student who was arrested by Border Patrol in late 2017.

A Mexican man named Juan, a Haitian woman named Virginie and a Honduran man named Franklin will now be able to reunite with family members while they wait to present their cases to stay in the U.S. to an immigration judge.

‘Each of them was in awe of such powerful generosity,’ said Monika Langarica, an attorney with the organization representing the three recently released immigrants.

Immigration detention is civil detention, which means that officials can only hold people in custody if they think the immigrants won’t show up for court hearings or are dangerous to the community.

‘We fight hard for our clients’ release, but often, any bond amount is an insurmountable obstacle for an individual, or for a family struggling to be reunited,’ Langarica said. ‘Luis and his team’s showing of solidarity with individuals they have never met is powerful. It literally helped people get free, and it should inspire others to do the same.’”

To read the complete story by The San Diego Union-Tribune, click here.