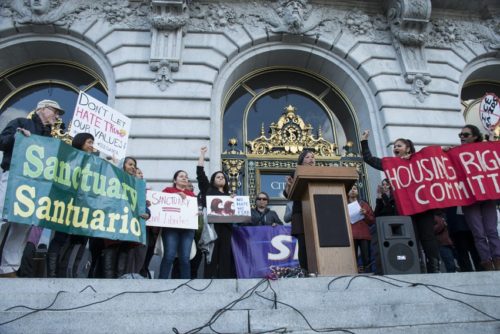 “The line is being run by the San Francisco Immigrant Legal & Education Network, known as SFILEN, which consists of 13 supporting organizations. These include CARECEN, PODER, La Raza Centro Legal, La Raza Centro de Recursos, Causa Justa::Just Cause and Dolores Street Community Services. They comprise the Rapid Response Network, a group of advocates ready to assist in immigration emergencies.

The hotline is meant for encounters with ICE only, not for general advice about immigration proceedings. It is limited to San Francisco County, cautioned Marisela Esparza of SFILEN.

Since launching on Feb. 10, the line has received more than 450 calls, she said. Many of them were simply people testing to see that the line was live. Others were people calling with the kind of questions that the hotline is not designed to answer such as people needing legal help with non-emergency immigration cases.”