We Are Not A National Security Threat: A Community Open Mic 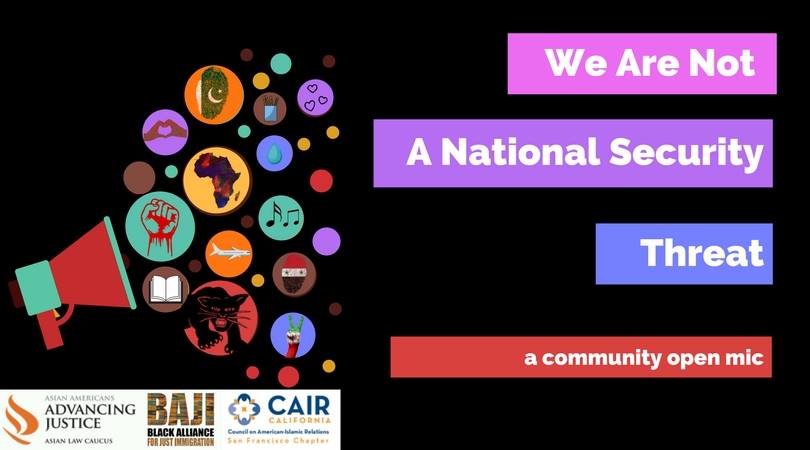 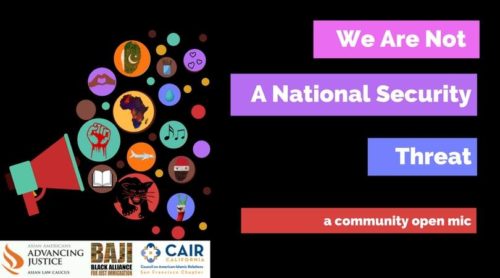 The Supreme Court is finally hearing the oral arguments on the Muslim Ban on April 25th. Thousands of community members from the six banned countries have for months been separated from their family members, unable to get the medical treatment they need, trapped in limbo in foreign countries, waiting to hear back from the consulate only to be arbitrarily denied their chance for a visa.

Muslims across the globe have collectively been deemed a “national security threat” by our current administration, and the repercussions are far reaching. Here in the US, our communities are under attack.

This is nothing new. Muslims have historically been treated as a national security threat in this country, leading back to the 25% of original Africans who were forced here on slave ships and the criminalization and surveillance of Black Muslim groups through COINTELPRO.

We see the continuation of the criminalization of our communities through the FBI’s surveillance of what they have defined as “Black Identity Extremists” and through xenophobic policies like the Muslim Ban.

Join us on April 22nd, just days before the Supreme Court’s oral arguments on the Muslim Ban, at an Open Mic. Let’s come raise our voices, share stories, sing, read poetry, etc. and define our own narrative, that we are not a national security threat.

Patrisse Khan Cullors, When They Call You a Terrorist